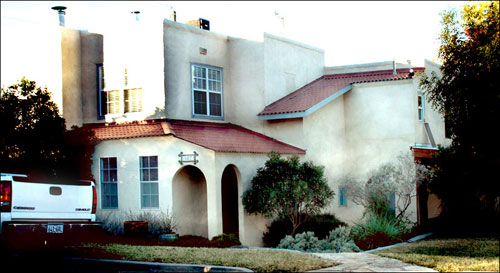 This Spanish style stucco home on North Cockrell was built in 1928 for A. Vick and Isabel Winter and their two sons. Mr. Winter had a clothing-cold storage business on West Murphy Street, and Mrs. Winter was an English teacher at Alpine High School. She had the reputation of master teacher and strong disciplinarian. The Winters also rented upstairs rooms to Sul Ross students for extra income.

Just prior to WWII, their older son Bill Winter and his wife Elizabeth purchased a cleaning and laundry business from the Ezell family and established Winter Cleaners and Laundry on the corner of Holland and 2nd Street. During the war Bill served in the Marines, and Elizabeth ran the business. After the war, they remained in that business, and Bill became a respected civic leader serving as Alpine Mayor from 1962 to 1966. The younger son, Vick Winter, served in the Air Corps in WWII and was killed over Burma in July of 1944.

After the deaths of A. Vick (1952) and Isabel (1962) the home was sold. Several families have lived in the house since the Winters, but Shaw and Jody Skinner purchased the property in 1984 and have made it their home since that time. They have changed the original simple two story structure into the lovely multi-level home that exists today. Both inside and out, the house now has all the most modern conveniences, comforts, and style of the new century while maintaining the integrity of the original design.