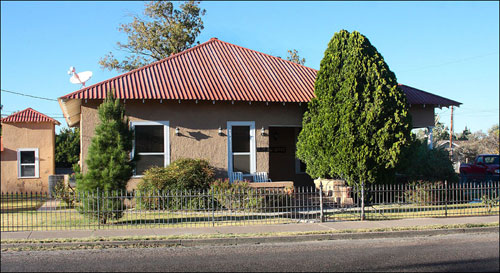 At the beginning of the 20th century, roads were poor, transportation was mostly by horse drawn wagons or horseback, and distances seemed much farther than today. Many ranchers had homes in the communities nearest their ranches to alleviate the travel problems. This early ranch style home was built in 1911 on land that area cattleman, C. F. Kimball had purchased from Dubois and Wentworth a year earlier. Kimhall’s wife Cora, and their son moved into town so that young Otis could attend public school. The elder Kimballs retained their ranching interests and homes for a lifetime, and upon their deaths, passed the properties to their son and daughter-in-law, Otis and Virginia Allen Kimball who occupied the home on Sul Ross Avenue until their deaths in 2001 and 1998, respectively.

Although it now houses the law offices of Michael Forrester, it remains the property of the Kimball family and has been beautifully maintained. Much of the original interior is still in evidence. The wonderful old kitchen with its turn of the century “ice box” and cabinets is still functional, and the dining room serves as an impressive conference room. Beautiful floors, art and furnishings can be seen throughout this historic home.