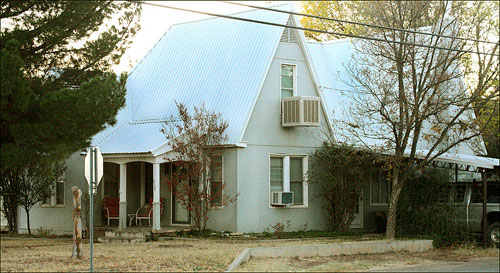 The first occupants of this simple modified Tudor-style home were the R.A. “Bob” McMurry family. Pictures from as early as 1928 are evidence of their ownership. In 1920, McMurry, his wife Lola and two-year old daughter Melba arrived in Alpine where he established McMurry’s Plumbing and Heating. Bob became involved in civic affairs, served as president of Rotary Club, advertised as the Plumber with a Conscience as his business grew and prospered. He kept a photographic record of all the homes, businesses and schools in Alpine and the surrounding area where he installed plumbing and heating. (That journal of photographs can be seen in the Archives at SRSU.)

In 1941, McMurry left private business and from ‘41 through ’44, he was a government defense contractor and installed plumbing and heating in buildings on military bases all over Texas. From the 1920’s through the 1940’s, the family acquired numerous ranches in the Big Bend Country and other parts of Texas. After WWII, the McMurry’s retired to one of their ranches in the Waco area.

From the late 1940’s until 1994, numerous families owned or rented the McMurry home and it remained basically unchanged. Then in ’94 the Lee Sleeper family bought the property and made major renovations. Jeanne Lewis bought the old home in 2003.