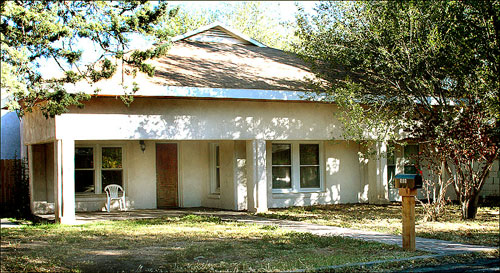 In 1929, Ernest Mollison became the manager of Alpine’s premier “picture show”, the Granada Theater. He and his family lived in this home from at least 1929 until 1943. Records show that it was built by F.E. Weyerts for J.D. Becker and Wise between July and September of 1928.   Numerous owners and renters have occupied the premises since the Mollisons.

Long term owners were the Hal Burnett family, pioneer Pecos County farmers and ranchers, who bought the property in 1950. They sold it to John VanDreumel in 1986. During his ownership, the home was enlarged and remodeled.

Present owners of this early 20th century home are Vic and Meredith Horn who bought it in January of 2010. Horn, a building contractor and owner of Covenant Construction, has done extensive remodeling. Both exterior and interior changes have been made. Use of old materials have been used in unique and innovative ways, and the home exhibits all the beauty and charm of an earlier time.