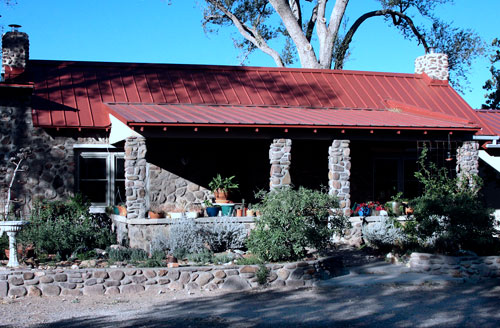 On the southwest side of Alpine is an area known as the Means Addition, named for the early settler who once owned that land. W. L. Means, born in 1872, was one of ten children born to Napoleon Bonaparte and Ellen Lewis Means. He came to Brewster County with his family from San Patricio County in the 1890’s.

The sequence of events in his life are not clear, but early in the 1900’s, he bought a large tract of land that included much of Ranger Canyon and built a cabin. At the age of thirty-six, he married Minnie Ola Rector, a widow with four young children. According to his youngest step-daughter, Means was a kind, God-fearing man. He was described as being the hard working, entrepreneurial type who tried many ways to make a good living for his family, but often met with hard luck. He ranched, farmed, had a dairy, spoke fluent Spanish, and had a good relationship with both Hispanics and Anglos; however, there are conflicting views regarding the man. Written accounts show that he shot and killed a man in Marathon, reasons unknown; he killed a second man in Alpine after a dispute about a water well; and he, himself, was shot and killed in 1914 by a barber named Gaston White.

Whether the Means cabin was sold before or after his death is not known, but there have been many different occupants. Present owners are Patricia Manning and Cynthia Wimberly.

The original house had only two adjoining rooms with pine floors, a fireplace at either end and possibly an attached storage space at the back of one room. Evidence on the property and a cistern show that the kitchen may have been separate from the main house at one time. Over the years, numerous partitions and additions have been made by many subsequent residents, but the present owners have done a marvelous job of restoring the original two room part of the house which is now a spacious living and dining area with a large porch across the front. An old bedroom has been converted into an inviting, functional kitchen, and a large bedroom and bath are at the back of the house. At one end of the house, a large room has been converted into an open, covered pavilion with beams that came from the old Marfa airbase.

Exterior rock work, a spectacular view of Twin Sisters, and beautiful native landscaping make this a most attractive home.