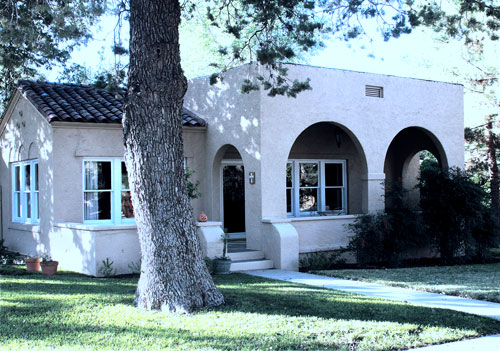 An article in the October 14, 1927, edition of the Alpine Avalanche announced that “one of the most modern and complete homes in Alpine” was to be built for Mr. and Mrs. J. C. Coleman. The contract was let to R. B. Tyler at a cost of $7,000. and called for “tile construction, stuccoed.”

That charming bungalow with Mediterranean styling in mind still sits on the corner of East Lockhart and Cockrell. The tile roof has stood the test of time and offsets the stucco house. Original windows with their wavy glass and beautiful woodwork throughout make this home a joy to visit. A new built-in bookcase in the living room perfectly matches the original arched French doors. When first built, the house was a two bedroom, one bath home. In the 1990’s, a large bedroom and bath were added on to the rear of the house, allowing the front bedroom space to be turned into a delightful library. Be sure to notice the wallpaper.

The cute galley kitchen, with its red and white color scheme, takes us a step back in time, while the modern appliances fit perfectly with the past.

Lovely furnishings throughout the home, beautiful art, needlepoint, and collections that reveal the interests, talents, and travels of the owners, and exquisite chandeliers all add a real touch of class and genteel living to this wonderful old home.The first owner of this home, J. C. Coleman, came to Alpine in 1920 to enroll at newly opened Sul Ross College. He did not fit the popular idea of a college freshman. He was 35 years old with a wife and small daughter. He had grown up poor, the son of a Confederate soldier who farmed after the war and struggled to feed his eleven children. Coleman envisioned a better life through education for himself and his family. He became Sul Ross’s first graduate in 1925, and after a year of graduate studies at Peabody College in Tennessee, he returned to Sul Ross as a professor and taught from 1926 until his retirement in 1954. He died in 1979, at the age of 95. Mrs. Coleman, who started Alpine’s first Garden Club in 1938, died in 1959.

Paul and Lavinia Goodman, respected Alpine business people, were the second owners. The third and present owners of this lovely home are Donald Mulhern and Rev. Eugene Myrick, both retired, who bought the property in 1989.