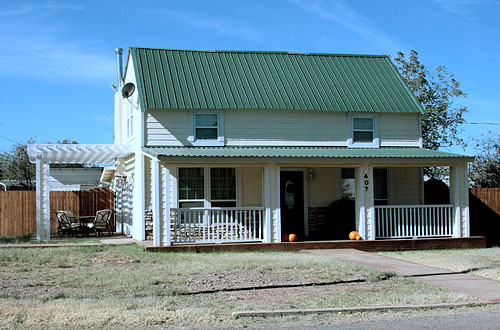 William A. Daugherty was the original owner of this historic, two-story home. He, his wife Josephine, and at least six of their eight children arrived in Alpine in 1902. Two of his three younger brothers, James and John Quincy, Jr. had come to Alpine in the late 1890’s and soon became prominent business leaders. They owned and operated the first icehouse and received the first contract to supply electricity to the city. Sarah Pickett Daugherty, the widowed mother of these sons, had also moved to Alpine by 1902.

When William Daugherty arrived, he used the office of his brothers’ ice works and started an architectural and building firm. He soon became one of the most respected and sought after contractors in the area. He designed and built many of the finest homes, businesses and churches in town, including the First Christian Church, several buildings between 5th and 6th streets, the Masonic Building, the Townsend-Palmer house, and this family home which was probably built shortly after his family’s arrival in Alpine.

In later years, William Daugherty established a cabinet shop and planing mill. He gained statewide recognition for his excellent craftsmanship and distinctive woodwork and cabinetry.William died in 1934, a month short of his seventy-ninth birthday. Josephine died six years later at age eighty-three.

The home stayed in the Daugherty family for many years. It became the property of Miss Flora L. Daugherty, a daughter of William and Josephine. Miss Flora, a longtime employee of Sul Ross, died in 1976. Numerous families have occupied this fine old residence since the Daughertys lived here. Many changes have been made, but the early 1900 architectural design, with the shed roof extending over the entry, and the interior floor plan are original. Although the ceiling beams in the living room have been painted, they also are original, and an antique stove still stands in the same corner of the room. French doors in both the living and dining areas provide a feeling of spaciousness and light, as well as an exit to a side terrace.

Evidence of William’s old buildings and a single car garage built of the distinctive concrete blocks, molded to look like quarry stones, remain on the property.Present residents of this historic home are the Stacey Martin family.