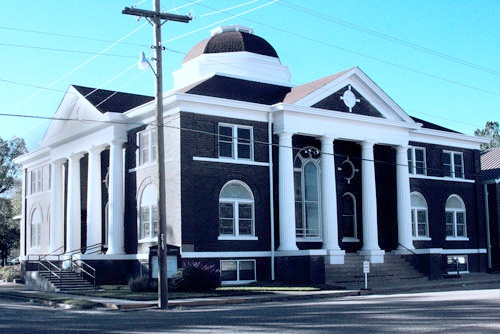 Historical records point to the Baptists as being the first protestant religious group to hold worship services in Murphyville (Alpine). Rev. George W. Baines, II is generally credited with preaching the first sermon at the Southern Pacific station in the spring of 1883 during a stop on his way to a missionary assignment in El Paso. Then in April of 1893, the First Baptist Church of Alpine was organized with nine charter members — eight women and former Texas Ranger turned rancher, Julius C. Bird. The first pastor was Rev. D. B. Rose who served from 1894-1896.

For several years the devout congregation met in various locations. In 1895, they constructed their own church, a small adobe structure located on the same site as the present day church.

Numerous pastors served the church in Alpine during those early years, among them, Rev. George W. Baines, II, who had preached that first sermon back in 1883. In 1902, he returned to Alpine with his family and served for the next five years.

Membership at First Baptist continued to increase, and in 1914, an inspiring young preacher, Rev. James T. Tartt, arrived to minister to the growing congregation. Under his leadership, funds were raised and the present church was built in 1916, replacing the little adobe church. Sadly, the young preacher died in December of 1916, from complications following surgery in Boston. His body was returned to Alpine for services and burial. His memorial was the first funeral held in the new, beautiful, circular sanctuary with the high domed ceiling. Magnificent stained glass windows are on either side of the altar and throughout the building. One beautiful window honors Rev. Tartt’s memory, and others honor the memory of early pioneer families who did much to promote religion in the untamed frontier.