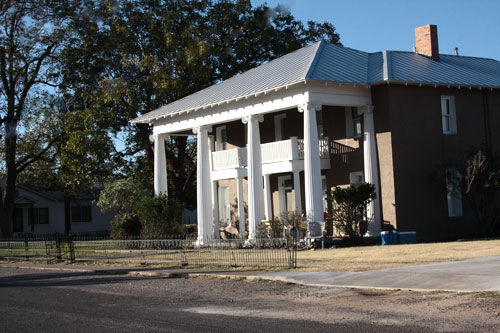 The first owner of the large two-story house on the corner of Sul Ross Avenue and 9th Street was Dock William Gourley. He had come to the Big Bend country in the 1880’s with a company of Texas Rangers assigned to protect the overland mail route and government surveyors and crews building the railroad. He and other Rangers saw the potential for ranching and other business ventures in the area; and upon discharge from their duties, many settled in the region. Dock Gourley entered the ranching business and served ten years as Brewster County Sheriff (1892-1902).

Construction of the Gourley home was begun in 1895 on land purchased the previous year from Gage, Turney, and Van Sickle. The original structure was very simple, built of cut stone, and did not feature the columned front portico. The Gourleys had financial difficulties and sold the house in 1903, but bought it back in 1906. Later that same year, the house was sold to A. L. and Alice Stroud.

The Strouds had ranched first in Limestone County and then in Menard County. Unable to expand his ranch land as he wanted, Stroud took advantage of the opportunity to buy public school land in far West Texas. In 1905, he relocated his family to Brewster County where he purchased eight sections of land northeast of Alpine, just east of the Glass Mountains. Over the years, Stroud was able to expand his holding to almost twenty-two sections.

Strouds bought the Gourley home in Alpine so that their son, Logan, and daughters, Sarah and Georgia (George), could attend public school. They remodeled the house in 1914. The exterior rock walls were covered with stucco and painted.  The portico and columns were added, and the interior was updated; consequently, it became known as “The Stroud Mansion.” The house remained relatively unchanged for the next 75 years. The last family member, Mrs. Georgia Stroud Dallman, died in 1989 at the age of 97. The home had remained in the Stroud family for 84 consecutive years. During their lifetimes, the Strouds and the Dallmans had become among the most active and respected citizens of Alpine and the entire cattle ranching industry.

Homer and Druanne Mills, owners since 1992, have lovingly restored their home. Something historic is evident in every room. Original floors, woodwork, cabinets, and beautiful etched glass windows can be seen throughout. Old fireplaces and mantles grace the downstairs rooms. Furnishings, artwork, china, and other treasures of the Stroud-Dallman family have been bought or rescued and returned to “The Stroud Mansion.” The Strouds and Dallmans would be proud!