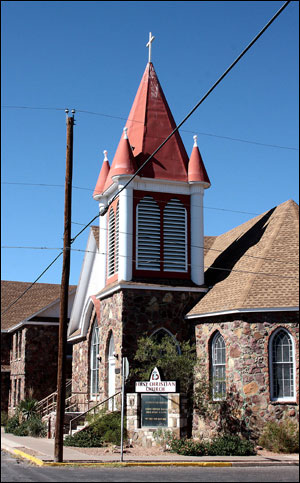 In June of 1890 General R. M. Gano, Civil War Veteran and a long-time minister of the Christian Church, came to Alpine and invited people of that faith who were interested in establishing a church to attend his service. It is not known where they met, but a group of seven people gathered to hear General Gano. Among the seven were Mrs. J. D. Jackson and Mrs. James B. Gillett. Both women became instrumental in the growth and development of the congregation over the next several years.

Then in 1898, Rev. James T. McKissick held a series of services at which a number of new members joined the little congregation. By 1904 the devout group was able to obtain a charter. Dr. B. F. Berkeley, M. B. Boyd, and Captain J. B. Gillett were appointed trustees, and work toward building a church was begun. In 1905 Rev. McKissick, who in 1898 had been responsible for bringing the group together, was called to pastor the Alpine church. The congregation grew steadily during his ministry, and in 1906 the new First Christian Church building was completed. Dedication services were held on Sunday morning, August 19, 1906.

William Daugherty, one of the four Daugherty brothers who were all early prominent businessmen in Alpine, was the chief building contractor. Adapted from the High Victorian Gothic style, the church features a central bell tower and asymmetrical floor plan. The original exterior walls were imitation metal bricks which were popular at the time, but in 1940 the building was rock veneered. The educational building next to the original church was built and dedicated in 1948. The sanctuary of the church is one of the most beautiful in Alpine. It features an impressive stained glass window which was installed when the church was built. It was a gift to the church by L. B. Caruthers in honor of his deceased wife, the former Lena Leota Van Horn. Mrs. Caruthers, age 28, died July 9, 1890, six days after giving birth to twin daughters. She was survived by her husband, the twin daughters, and five young sons.

Lana Covington is now the minister of the First Christian Church, and there are approximately 50 members.