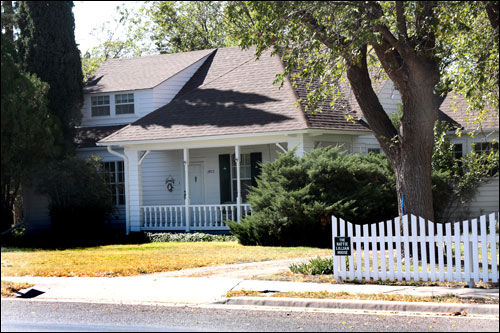 This lovely Cape Cod cottage was built in 1927 for Mr. and Mrs. Virgil E. Miller and their baby daughter, Charlotte Jean. It is constructed of cypress wood and was considered to be a very modern style for that time period.

Mr. Miller, who was originally from Illinois, had been a pre-med student at the University of Oklahoma when he was drafted into the Army to serve in World War I. During basic training, he suffered severe health problems and was confined to numerous military hospitals for the next several years.  While receiving care in El Paso, he met Hattie Lillian Long, a United States Army nurse, whom he married. They lived in San Angelo, Texas, prior to moving to Alpine in 1927. Here they hoped the desert climate would help alleviate Mr. Miller’s chronic illness; however, he died in 1932 at the age of 37. His widow remained in Alpine, reared their daughter, and lived in the house until her death in 1976.

Only four families have owned this old house since that time, and few changes were made until Hal and Elaine Craig purchased the property in the late 1990’s. They did extensive restoration, made improvements and built new additions, but they retained many charming features. Most of the floors are original, as are the old pocket doors and hardware. The dining room has built-in corner glass front china cabinets and an original chandelier. The kitchen pantry and spice cabinet are still convenient storage spaces. A cedar-lined closet and a telephone nook can be found in a hallway. Both the living room and master bedroom have fireplaces, and an old coal chute is still in the basement.

Present owners of this beautiful early Alpine home are Dan and Robbie Ray who bought the property in 2010. Dan is a structural engineer, and Robbie teaches at SRSU. The Rays are delighted to live in this historic home, and Robbie feels such a presence from the past that she has named her new home “The Hattie Lillian House” in honor of the original owner.