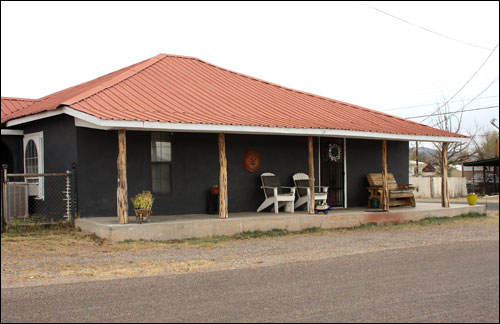 This old adobe house, with the long, covered front porch, dates back to the early 1900’s. It is possible that a family named Fierro built the home and lived in it for some time; however, the earliest known residents were the Apolinar “Polo” Garcia family.

Polo was born in Torreon, Mexico, 1900, to Felix and Eduvigen Lujan Garcia. He came to the Big Bend country with his family when he was a young boy. In Alpine he met his future bride, Isabel Lafarelle, who was born in 1903, to Brewster County pioneers, James and Concepcion Lafarelle. “Jim” Lafarelle had come to Brewster County from Wilshire, England, as a young man and was involved in exploration and mining of quicksilver in the Terlingua area. His wife, “Chona” Garcia, was from Presidio.  Six children were born to the Lafarelles. The family became prominent Alpine citizens, engaged in a variety of business enterprises.

Polo and Isabel were married in 1919, and soon took up residence in this adobe home on the street now known as South Harrison. For the next few years, Polo worked for the Scales brothers at the Candy Kitchen, a shop that was popular for its soda fountain, ice cream, and homemade candy. From that experience, Polo saw the potential for a similar business of his own. He added a large room and covered porch to the front of the little house and began selling sodas, candy, ice cream, and other food items and sundries. After several years, he officially opened the expanded Polo’s Grocery Store on January 1, 1929.

The home and grocery store were conveniently situated on the route to the Chisos mines, and it became a popular stopping place for travelers and wagon trains to water horses and stop for supplies on the way to South County.

As mining dwindled and then came to a stop, many families relocated to southeast Alpine, and Polo’s grocery business still prospered because of the increased population in the vicinity of his store. The front of the store also became the bus stop for school children who lived in that area known as New Town.

While the property behind the store was still a vacant lot, a baseball field was laid out; and it became a regular spot for young athletes to gather and to play the popular sport. That lot became known as Polo Garcia Field, and many a game was enjoyed by players and fans alike.

Polo Garcia remained in business for fifty years. He retired and closed his store just two months prior to his death in 1979. He was survived by his wife, Isabel, who moved to California with their one daughter, Irene Garcia Minjares. Isabel died in 1993.

In 1991, Guy and Pam Monclova bought the empty home and began their restoration and remodeling projects, which they say are never ending. Much of the old house was restored–major work was done on the kitchen and bathroom; windows were replaced; electrical installations and appliances were added and upgraded. Original floors, ceilings, and thick adobe walls all add to the charm of the comfortable historic home.